How many ancestors does my dog have?

And it has a weird answer.

If we line all the canine chromosomes up in pairs and take a picture of them, we have the canine 'karyotype', which looks like this: 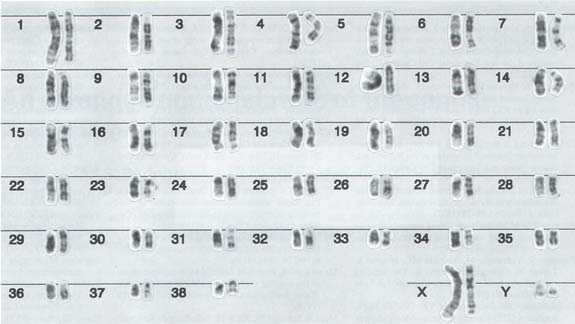 When you breed your bitch, she will pass 39 chromosomes on to her puppies, one of each pair -- you also know that for sure.  But which chromosome of each pair will be passed along to any given puppy is a matter of chance.  Still, she will definitely give half of her chromosome to each puppy, thus being related by 50% to each one.  Her own parents will be related to her offspring by 25%, half of her relatedness.  Or average.

On average?  Yes, just on average.  Bethesda (let us say) will definitely give 39 chromosomes to her daughter Chloe, but those 39 could have been inherited from her mother, Athena, or her father, Apollo.  On average, about half of the chromosomes passed to Chloe will be from Athena and about half from Apollo, but that's only an average.  In fact, obviously one grandparent or the other must be overrepresented in the grandpuppies -- 39 can't be cut in half evenly, after all.  In fact, there's no reason at all to expect any given puppy to get equal inheritances from each grandparent.  It's theoretically possible that Bethesda will pass on to Chloe only those chromosomes which she inherited from Athena and none from Apollo.  Not likely, but possible.  In that case, Chloe is not related to Apollo by 25%, which is the expected average relatedness between granddaughter and grandfather.  She isn't related to Apollo at all.  Strange, but true.

Let's see how this would work via a diagram:

In theory, no dog can have more than 78 unique ancestors, because it only has 78 chromosomes.  Of the 512 ancestors shown in a nine-generation pedigree, most must have vanished, because there's not room for that many ancestors' chromosomes in the pedigree.

A phenomenon called 'crossing over' occurs during meiotic cell division, when gametes -- that is, sperm and egg cells -- are being formed.  In crossing over, the chromosomes of each pair -- the A's, let us say, or the B's -- wrap around each other and trade bits.  This phenomenon is mentioned, briefly, in a few genetic books written for the dog breeder, but its importance is not emphasized.  But it is very important.  It's not like only a few tiny fragments are traded here and there -- crossing over thoroughly combines the genetic contribution from each chromosome, making 'hybrid' chromosomes before the chromosomes assort into their various egg or sperm cells.  Just how much crossing over takes place between each pair of chromosomes, and just which bits of DNA are traded back and forth, is highly variable, but it's generally quite a bit.

Your dog has more than 78 ancestors.  We figure ancestry in average percentages because there's no other way to do it, but isn't it interesting to reflect that out of the 512 ancestors in that nine-generation pedigree, it's possible that not a single dog's genetic contribution has been entirely lost?

Incidentally, because a parent is always related by 50% to each offspring, but siblings are only related by 50% on average to each other, it is not true (as I have seen stated) that a brother-sister breeding is a closer inbreeding than a father-daughter breeding.  Instead, a brother-sister breeding will sometimes be closer than a parent-offspring breeding and sometimes be less close.  Only a parent-offspring breeding will reliably be exactly 50% (yes, I know, except in the case of weird genetic mishaps such as trisomies or uniparental disomies).